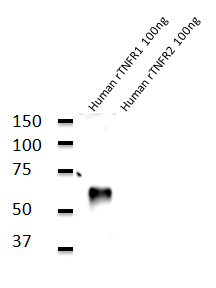 Mouse and rat - not tested.

Immunohistochemistry To be determined.

Source: This mouse monoclonal antibody was raised to an extracellular domain using a peptide (amino acids 23-39) coupled to KLH by the addition of an C-terminal cysteine.  Hybridoma media was obtained from cells grown in culture media and concentrated by ammonium sulfate.